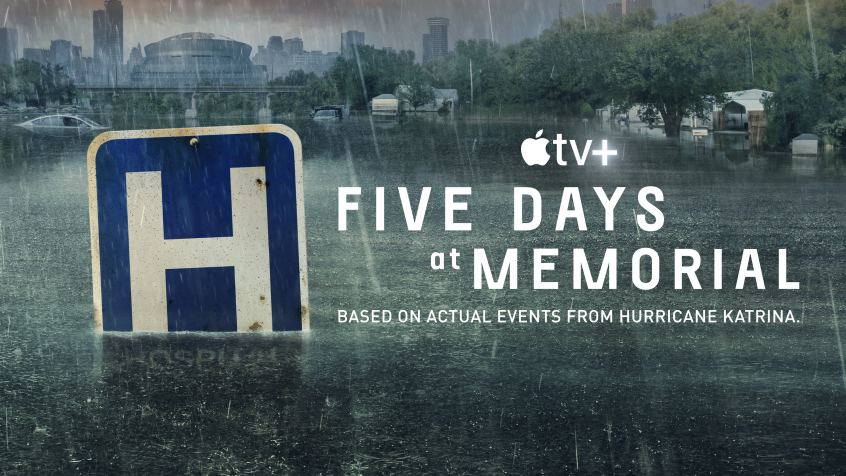 “Five Days at Memorial,” a new series on Apple TV+, dramatizes events at Memorial Medical Care Center in New Orleans during and immediately after Hurricane Katrina in 2005. In the days after the storm, the hospital endured flooding and temperatures exceeding 100 degrees.

When all was said and done, Memorial Medical Center lost a total of 45 patients – a high number when compared to other hospitals in the area – highlighting an urgent issue: how do we ensure that vulnerable hospice and palliative care patients do not fall through the cracks during a cataclysmic event?

“It was utter chaos,” Jamey Boudreaux, Executive Director of the Louisiana-Mississippi Hospice and Palliative Care Organization, remembers. “In the aftermath of that, I had agencies calling me and saying, ‘We have 20 patients that we don’t know where they are, whether they’ve been evacuated to the airport or transported out – we don’t have any way to find them.’”

In the wake of the storm, Katrina exposed a critical flaw in the system that kept track of hospice and palliative care patients and their care during natural and man-made disasters like storms, fires, terror attacks and power grid failures.

“In the aftermath of realizing what had happened to hospice patients here, I started thinking in terms of ‘there’s got to be a better way of these patients finding some safety,’” Boudreaux says. “We’ve got some really fragile people out in the community. We have people who are living alone that don’t have a caregiver. What do we do with them?”

Boudreaux began to identify and categorize patients who were vulnerable to disasters, as well as starting a dialogue with local parish emergency managers across the state who could provide assistance during a crisis event. However, that early system was not quite quick enough.

One evening, while speaking with mumms CEO Leo Radosta, Boudreaux explained his dilemma; “In order for this to work, [emergency managers] have to have a continuous reminder of who and where these folks are.”

With that, Boudreaux and the mumms team joined up to work on the AtRisk Registry, a software registry that’s become the repository of choice for real-time monitoring, tracking and coordinating evacuation for all the patients in Louisiana, and is available throughout the US Healthcare system. Shortly after the AtRisk Registry was released, the Louisiana Department of Health incorporated use of the registry into their Model Plan for Hospice and Home Health agencies as a part of its official disaster preparedness plan. Now mandated by the state — in part because of what happened at Memorial and other hospitals — the Louisiana Department of Health and Hospitals commissioned mumms Software to create a version of WatchPoint AtRisk Registry for hospitals statewide.

However, in other states, Emergency Preparedness wasn’t mandated until 2016, when the Center of Medicaid and Medicare (CMS) established a new set of guidelines and rules for providers to follow during a disaster.

“CMS came out with revised standards around emergency preparedness. One of the standards now requires hospice and home health (providers) have a way of alerting local emergency manager to these vulnerable patients that would need their assistance in the event of an evacuation order.

They wanted individual hospices to come up with a solution for those patients. Well, I’m really happy to say, we do this through the system (WatchPoint AtRisk Registry),” says Boudreaux.

The new CMS Condition of Participation Standard establishes a consistent and national emergency preparedness requirement for different providers participating in Medicaid and Medicare.  While enrollment in a system is mandated in Louisiana, it’s voluntary in other states, but, Boudreaux says: “If you’re part of a big hospice chain in Louisiana or Mississippi, you’re now using this system (WatchPoint AtRisk Registry), because it meets that standard of having some method of communicating the vulnerability of your patients to the emergency manager in their county or parish.”

Nevertheless, Boudreaux believes that a system like WatchPoint AtRisk Registry can be utilized by agencies and providers throughout the country: “Corporations can use this across the country. It sends one report. And that’s what emergency managers want.” Before, emergency managers often complained of incomplete information that had sometimes either been faxed or handwritten. “The information was not synchronized. It wasn’t formalized.”

“[The AtRisk Registry] is all the information we need,” says Boudreaux. “So, you don’t have to have the entire clinical chart. This is what [emergency managers] ask for every time they handle evacuated patients. They want to know not only the patient’s locations, but who’s their doctor and where is their pharmacy?  Who is their hospice or home health provider and what DME supplies do they need and who’s the supplier? Contact information for the next of kin? What are their mobility issues? Do I need an ambulance to transport this patient, or can we send a car or para-transit vehicle to get them out of harm’s way? Because they get patients in all conditions and they have to try and figure out what these patients need. So, we made it very, very simple for them to do this.”